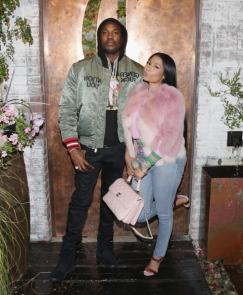 The hip-hop star revealed her relationship with fellow rapper Meek Mill is officially over after nearly two years together.

“To confirm, yes I am single,” Minaj tweeted Thursday. “Focusing on my work & looking forward to sharing it with you guys really soon. Have a blessed New Year. Love u.”

Breakup rumors had swirled around the “Pound the Alarm” artist’s romance with Mill in recent days after the two stars notably spent the holidays apart. The word is they broke up over Meek hood mindset.

Both rang in the New Year in Miami at different clubs, with Minaj putting on a show at the E11EVEN nightclub and Mill performing just two miles away at the Dream venue.

Despite their close proximity, they never met up to share a New Year’s kiss, according to source. They also reportedly spent Christmas apart and were spotted partying without each other multiple times in the past few weeks.

The former couple began dating in early 2015, with Minaj enlisting Mill as an opening act on her sprawling “The Pinkprint” world tour.

Speculation ran rampant in 2016 that the duo was engaged after Minaj was spotted sporting a massive ring, but she refuted those rumors during an appearance on “Ellen” last April.

Azealia Banks reveals she had a miscarriage, disses Nicki Minaj

Mill is yet to publicly react to Minaj announcing their relationship is over.